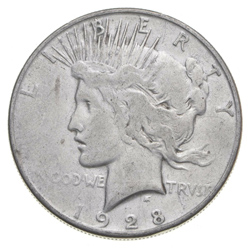 The year 1928 was the last year Peace Silver Dollar coins were under continuous production in the United States of America before it temporarily halted for minting. At that time, the quota for replacement dollars was fulfilled under the Pittman Act and the public demand for these coins was diminished. These coins would later be minted again in 1934. Before the silver coins took the production break in the US, approximately 360,649 were minted in Philadelphia, Pennsylvania, and 1,632,000 were minted in San Francisco, California in 1928.

Whether you are an experienced collector or novice beginner at collecting antique American coins, you will definitely want to add these 1928 peace silver dollars into your coin collection. These valuable 1928 silver dollars are available in Philadelphia mint and San Francisco mint. The Philadelphia mints are unmarked but the San Francisco has an “S” mark under the word “one” on the tail side. You will find competitive prices for its value below.